“The celebrity is a person who is known for his well-knownness” – Daniel J. Boorstin

And who knows this better than us Indians! India is home to celebrities with some of the largest fan bases. And it’s not just because of our huge population but also because of the high regard we bestow upon the celebrities.

If you think of celebrities in India, two industries have dominated like no other – films and cricket. No doubt, the initial generations of stars born out of these industries enjoyed a fair share of fame and riches back in their day. Unfortunately, not all coveted celebrity lives continued the same way ever after. As the shine of the starry lives faded, some found themselves looking for work, some looking for money and some looking for attention.

Today’s celebrities are starting to learn from the mistakes of their predecessors, especially on the after-star life front. They have a realization about the relatively shorter shelf-lives of their careers as compared to most other professions. Simply put, they’ve started to think about how they will sustain their not-so-common lifestyle once they stop getting the high-paying work.

And no, the answer most of them are looking for is not being judges on reality shows or doing commentary and post-match analysis!

They have started thinking business. Celebrities have started to make relationships with businesses beyond brand endorsements. Welcome to the world of celebrity investments and how they can hedge against their volatile public image and the eventual end of their shelf life. 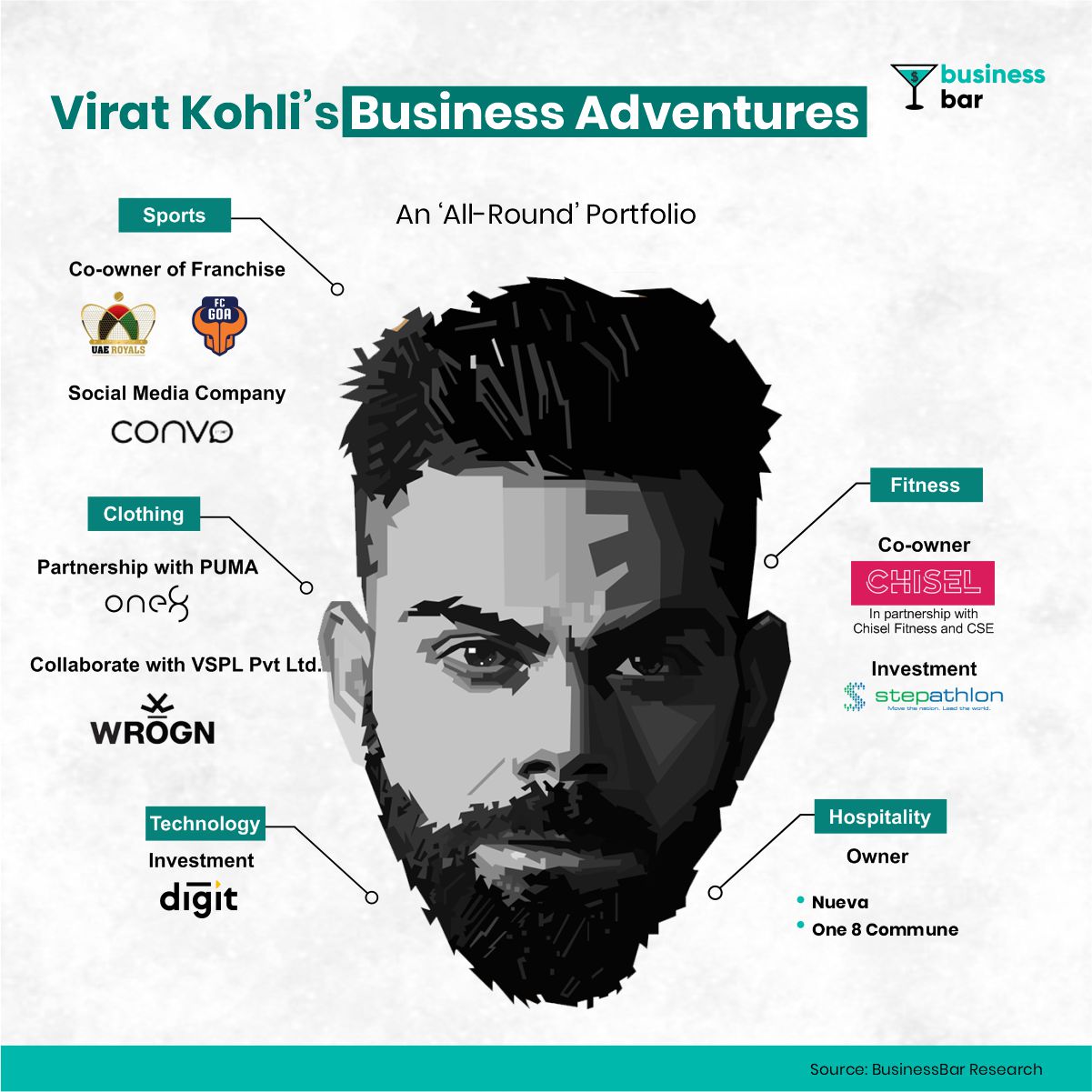 Celebrities’ foray into becoming business owners can broadly be looked at in two ways: making financial investments in startups and starting their own ventures. Let’s start by delving into the former first – Celebrities as investors.

The ‘Star-vestors’ – Celebrity as Investors

A distinction, however, is that not all the equity stake acquired by a celebrity is attributed to the financial capital they bring to the table. Celebrity investments in startups are not just about money and equity. There is often the angle of sweat equity. Sweat equity refers to the value that someone brings by virtue of the labor they put into something. Getting rewarded with equity for one’s sweat and not the money invested. And at the risk of stating the obvious, yes, your ESOPs are a kind of sweat equity.

So do you remember MS Dhoni doing quirky ads for Cars24 and KhataBook or Deepika Padukone telling us the benefits of greek yogurt in Epigamia’s TV commercials? Both Dhoni and Deepika have invested undisclosed amounts in respective startups and are not just their brand ambassadors but also esteemed names on the cap-table of these startups.

And these are not rare examples, it is a common practice now for celebrities to endorse products and act as brand ambassadors for the company they’ve invested in. Thus being able to lever their social capital to get a better bang for the money they invest.

From a startup’s perspective, celebrity investments are a good deal too. Not just because they could have famous people as brand endorsers by paying them in equity and saving cash upfront, which is super important for all early-stage startups but for the following reasons too.

Not surprisingly, most investments made in startups by celebrities are quoted as ‘undisclosed’ amounts. Thus, a comprehensive look at the money being pumped from this strata is a secretive world. That being said, most investments are at earlier than later stages in the startup’s life cycle and hence range from a couple of lakhs to a few crores usually.

Few prominent celebrity investments have been enumerated in the infographic below: 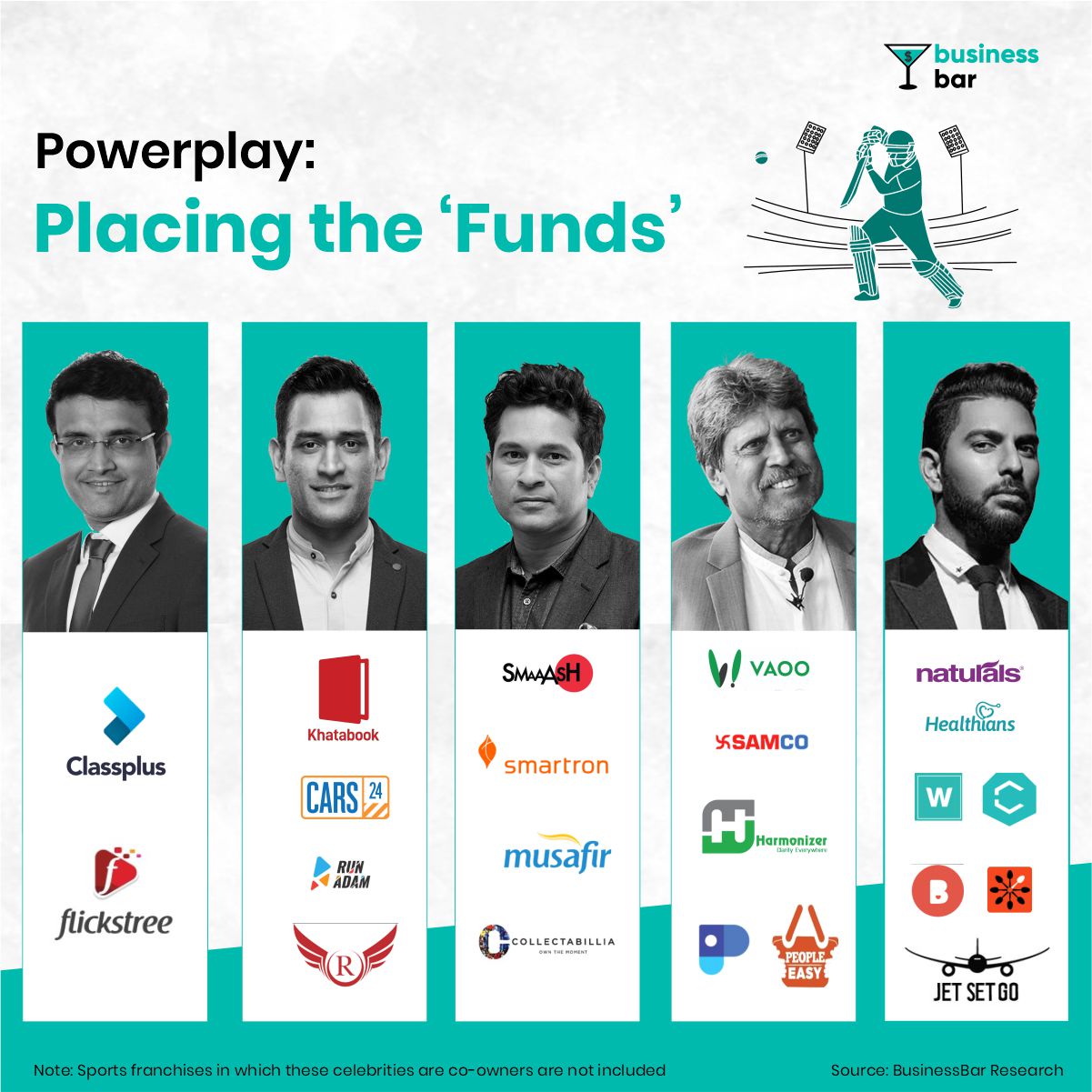 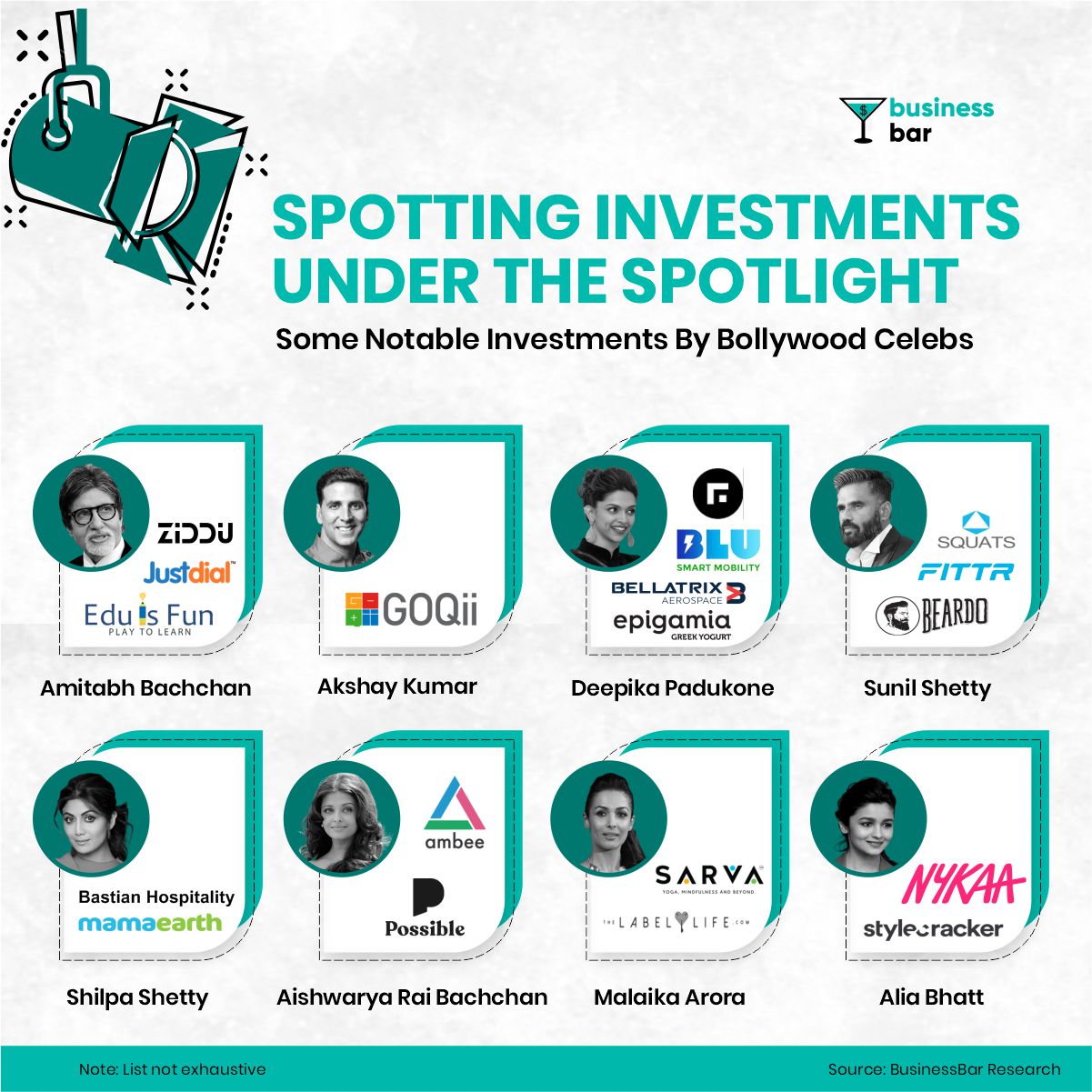 The ‘Celeb-preneurs’ – Celebrities as Entrepreneurs

“Beauty is no accomplishment on its own. It’s what you do with it.” – Padma Lakshmi, Indian-American Actress

The inception of this concept goes back to 1987 when Elizabeth Taylor launched her own perfume, while in 1994, supermodel Iman launched a cosmetics line for women of color. Following launches of such brands, there have been countless celebrity-fronted collections but nothing quite on the scale we are witnessing right now.

Many celebrities are not satisfied with just endorsing a product or being a part of an existing brand; now they want full ownership. Ownership not only in terms of stakes but in product ideation and making. Now they want to be expressive not only in their profession but through owning a brand as well. The attribute cannot be limited to their profession, we can refer to the example of celebrities opening up the restaurant chains. Recognizing the importance of business ideas, celebrities are now seeing this as an opportunity to express themselves through a medium of product offering.

Moreover, this prospect looks sound from the other side as well i.e. their fans. Almost every fan wants to instill the very same attribute their celebrity possesses and such brands act as a connecting point.

But the role of social media as a driver of celebrity product lines popping cannot be overlooked. While celebrities have been ever-recognizable faces since the beginning, they still depended on TV, films, interviews, and other media for exposure. Social media changed this. With one tap, a celebrity can connect directly with millions of fans (followers) within no time. Executing social capital has never been so easy as it is today.

A few notable quotable celeb brands can be found in the infographic below: 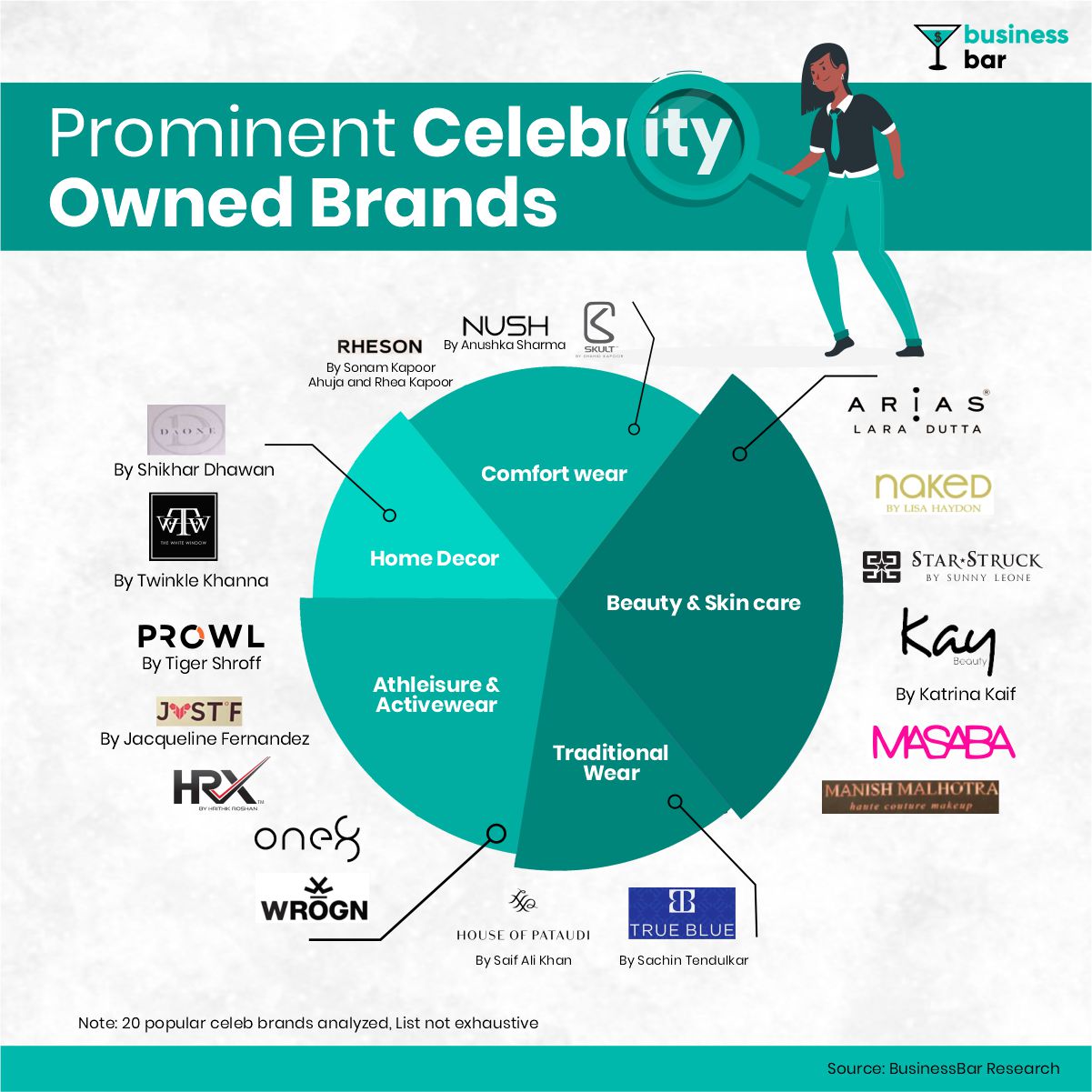 Obvious or not, we can see that most of these ventures fall in either of the two categories: Beauty care and Clothing. Surely some celeb startups do not fall in these two categories such as Riteish Deshmukh and Genelia Deshmukh’s Imagine Meats, a startup that is looking to venture into plant-based meat products, but the majority of them are found to be in fashion or beauty care only. A plausible explanation to why celebrities are getting their feet into these industries is that they can exploit the following synergies in the space.

That being said, the ‘one-man/woman show’ aspect of these businesses also brings a threat to the business. Sales are highly correlated to the public image of the celebrity which especially in today’s world is anything but predictable. Moreover, the shelf life of a celebrity career dictates the duration of time for which the brand can command market share. From Lindsey Lohan’s leggings to Britney Spears’s restaurant, the USA is filled with examples of failed celebrity businesses and product lines that failed. No wonder, once the glamour fades, and new icons pop up, it grows immensely tough to sell products in yesteryear names, especially those related to beauty and fashion.

“Careers are here and they’re gone. No matter how great we think we are, we’re nothing but the temples of Ozymandias-we’re ruins in the making.” – William Shatner

All in all, celebrities have understood the value of business assets more than ever before. They know the best hedge against their short-lived primary careers is to not just invest from the high-paying jobs they have, but also capitalize on the immense social capital they command in the peak stardom years. That being said, just like past returns, old stardom is also no guarantee for future business returns. Business success has always been and will always be guided by market forces such as product-market fit and customer satisfaction. Thus it will be interesting to see how well these stars fare in their later years when it comes to playing the role of actual founders and business owners.

Disclaimer: This blog is intended to provide educational information only. The publisher is not engaged in rendering any professional services. If expert assistance is required, please seek the services of a competent professional.

Developed by Aditya Sonawane & Designed by Sunil Maurya for BusinessBar